Notes
slightly daunting, starting a project like this. I know nothing of electronics at this point, or even where to start. the soldering iron I'd requested for christmas turned up in the stocking, with a solder-sucker and some solder, so I had my first tools. I decided to try my hand at building electronic noise boxes after picking up a Bugbrand Weevil '08 , and reading (on more than one occasion) the Music From Outer Space website.

I picked up a bible, Nicolas Collins "Electronic Handmade Music" for the journey. I'm glad I did - despite my complete lack of knowledge, Nic's style of writing really sucks you into the potential to make noise out of some unlikely sources, and how to get started using some more traditional electronics. Down the line, I have a spare Casio keyboard I'd like to hack, but my real interest is in building small autonomous units which could be hooked up to make noise.

So I ordered a Weird Sound Generator PCB from Ray Wilson at MFOS, and would source the parts from the UK (to avoid import duty as much as anything else) - very impressed it was with me in just over a week with a little note from the man himself. As I'd never done this before, I didn't want to break the PCB before I'd learnt to solder, I decided I try and make a simple oscillator based on one of Nic Collins circuits.

I needed a stock of parts for the Nic Collins projects, as well as the parts for the WSG down the line. Most Brits thinking electronics think Maplin - I picked up most of the parts there, and most of them (barring the potentiometers) turned up for the WSG in a little over a week, but the pots showed no signs of showing up. While hunting for suitably large enclosures, I came across a recommendation for BitsBoxfor small orders in the UK - amazing! Bob at BitsBox answered some basic questions I had, and I accumulated a selection of components for my first builds, some tools and the like for significantly less than this new habit would have cost at Maplin. The other advantage of BitsBox is the cheap postage (flat rate of £1.50), which was handy as I kept discovering something else I hadn't acquired.

Enclosures remained tough - most boxes seemed a little small for what I needed for the WSG. Tom from Bugbrand recommended one from Rapid Electronics, so I bought two, and a couple of small project boxes too, which might hold simple toys.

I also bought a 1w amplifier kit from BitsBox, which I thought I'd start with before the oscillator. Sadly, I didn't manage to translate the schematic, and ruined the stripboard in less than 30 minutes. 1w amplifier on hold until a new stripboard is acquired...

So, I plunged into the two voice oscillator project. Nic Collins promised this one would work - a breadboard, with a 40106 Hex Schmitt inverter, with a resistor and capacitor would make a tone. He wasn't wrong. I took my time to make sure I was doing it right, and indeed, first time I plugged this in, I got a noise. Mild ecstasy! I swapped the caps and the resistors around and enjoyed the different tones, but with these things, it's all about exercising control, so my favourite breadboard had a potentiometer in there. Nice.

My Dad was down the weekend after, so I asked for a soldering lesson, with the aim of transferring the two voice oscillator to a circuit board. Taking advantage of a my Dad's third and fourth hand we wired up a padboard - my main area of confusion was how to replicate the buses of the breadboard when wiring up a blank circuit board. I have to confess to remaining confused about this, but we did manage to wire up the 40106 with a photoresistor quite successfully. However, getting the potentiometer/resistor to enable the second voice wasn't happening. We struggled for an hour then admitted defeat.

I returned to the project later in the week, and re-read chapter 18 and discovered an elementary mistake - we hadn't wired in resistors/diodes between each oscillator and the output jack, which Nic tells me is what it needs so you can hear both oscillators working. I followed the instructions this time, and included two N4148 diodes, as well as an on/off switch (which took me longer than it should have to realise only one pole of the battery needed a switch on it to break the circuit). However, in the intervening four days I'd lost the thread of how we'd wired together the unit thus far, so it became like picking up a book after a few months, and discovering someone had ripped the last chapter you'd read out of the book. That said, I tidied up some of the joints, and squeezed all the required components in. On firing it up, however, I got only a very low hum from the unit. I suspect my earths have got muddled.

So I returned to this, keen to make the simplest circuit work, and with a little more confidence in my soldering skills. Suffice to say, a much neater job on the assembly didn't help with v.II. All wired up, but no noise. I decided to try again, after staring at the Collins' Bible for a long time. Then I realised an elementary error - I'd put the capacitor and resistor in line to pin one, when wired pin 2 straight to the output (and repeated the trick on pins 3 and 4 for the photoresistor). The elementary error was that the the resistor has to bridge the pins to make some noise... With my newly acquired soldering confidence, I desoldered the components and misplaced wires, and started v.III. this took about 40 mins, and voila! danjec (01) makes noise..! It's nowhere near perfect, despite it's simplicity - the knob appears to work as a pseudo theremin; the enclosure is too small to house the battery and wiring, and there are strange results on the interactions of the two oscillators, with noticable dips and silences in the as one plays it. But it makes noise. I can now move on...! 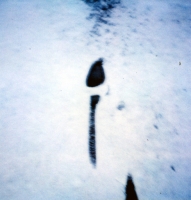